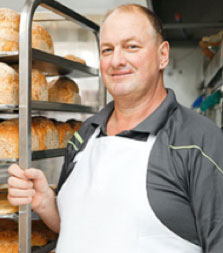 The Healthy Loaf was started in 2008 by second generation, Master Artisan Baker, Graham Gardner when after almost forty years in the industry he saw a consumer need for healthier, high quality bread products. This gave rise to the ethos of the Healthy Loaf, a bakery that would only use the best ingredients, sourced for their health benefits and performance, whilst meeting high quality expectations.

During this search for healthy options and alternatives Graham became aware of the conditions, little known at the time, called gluten intolerance and coeliac disease. Gluten is a complex protein that is found in wheat, rye, oats and barley, which is hard for the body to digest. When a person who suffers from coeliac disease, an immune disease, eats gluten, a damaging immune reaction causes inflammation and harm to their small bowel (intestine). Other types of reactions to gluten are often called gluten intolerance. A gluten-free diet is the only way to manage this condition. The Victoria Government’s Better Health Channel website reports that ‘Coeliac disease affects at least one in 100 Australians’ and this figure is increasing. (Click here to read more about Coeliac Disease at Better Health Channel.

Graham began to search for a healthy product alternative to accommodate gluten intolerant people and coeliac sufferers. He found initially that gluten free products were heavy, dry and for the most part harsh in flavour–most coeliac sufferers reported they had simply given up bread rather than endure the products available. One memorable description given to Graham of a gluten free loaf of bread was that it was like ‘a sliced up house brick’.

In 2009 Graham met Terry Hunter who after having a friend of his diagnosed with gluten intolerance, had made it his mission to come up with a product to mimic normal white bread, in both taste and texture. Terry was able to research and develop a gluten free flour mix but had no baking expertise. Graham using his master baking skills and experience transformed this dough and baking process, into the unique and comprehensive range the Healthy Loaf produce today. This collaboration, founded on the shared observation that tasty, healthy and genuinely  gluten free bread products were needed, has led to over twenty-seven new products being developed for gluten intolerant people and coeliac sufferers and that list is still growing! An astoundingly common remark from the Healthy Loaf’s customers is ‘this bread is just like real bread!’

Why the Healthy Loaf gluten free is different

The Healthy Loaf’s range of breads, rolls, wraps and pizza bases is most unique because of how it’s made. The Healthy Loaf’s Master Baker, Graham Gardner, pioneered a technique that mimics the baking process of real bread but without the gluten. The Healthy Loaf prove their products like normal bread so they become soft and fluffy–avoiding that dense and heavy look, feel and taste, that so many others suffer.

Graham is a master baker with almost 40 years of experience. He has been baking since 1976 and learned his craft from his father. During his career, Graham has owned and operated several of his own successful bakeries across Victoria. Graham has always had an interest in modifying commercial recipes to enhance their quality, flavour and to create healthier alternatives. Graham’s first major ingredient change happened back in the late 1980’s when moved away from the industry favoured animal fats to vegetable oils. This change improved the freshness of the bread, its keeping quality and produced a better quality, soft, fluffy bread. Since 2008 Graham has increased the use of extra virgin olive oil in his baking, to further enhance the flavour and quality and favours Cobram Estate Olive Oil, locally pressed in Geelong.

Graham is proud of the difference this product is making to the lives of gluten intolerant people and coeliac sufferers. The Healthy Loaf receive numerous comments from people about how they can enjoy eating bread again. Graham intends to continue to use his master artisan baking skills to develop new products with this same “just like the real thing” theme.